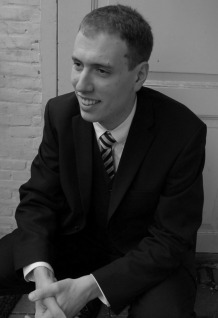 Lionel Meunier was born in France. He began his musical education in the music school of his town, Clamecy where he studied solfege, recorder and trumpet. Being passionated for music from his young age, he continued his studies in IMEP, Namur at the age of 18, where he gratuated with high distinction from recorder in 2004 as a student of Tatiana Babut du Mares. He had masterclasses with Jean Tubéry, working at the same time with Hugo Reyne. The same year he started vocal studies in the Royal Conservatoire of the Hague with Rita Dams and Peter Kooij as his teachers.

Since that he has been sung with numerous ensembles such as the Collegium Vocale Gent (P. Herreweghe), World Youth Choir, Arsys Bourgogne (P. Cao), Amsterdam Baroque Choir (T. Koopman), Namur Chamber Choir, Ex Tempore and with soloist ensemble such as I Favoriti de la Fenice (J. Tubery), the Soloists of Namur Chamber Choir, Capella Pratensis and as ripienist with the Nederlandse Bach Vereniging. All these experiences gave him the opportunity to work with many specialists like Christophe Rousset, Tonu Kaljuste, Gustav Leonhardt, Roberto Gini, Jean-Claude Malgoire, Paul Dombrecht, Florian Heyerick, Rinaldo Alessandrini, Richard Egarr...Lionel is also active as a soloist, he has performed the A minor mass of Schubert, Johannes Passion and sever cantatas by J. S. Bach, Haydn's Stabat Mater & Nelson Mass, Kronung's Mass and C minor Mass by Mozart, Mass in G of C. Franck, ect...

He is the artistic director of the ensemble Vox Luminis, group that he created in 2004 with his friend pianist Francis Penning.